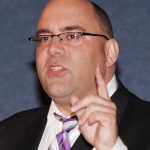 Friday, May 3, 2019 at 6:45 PM at All Souls Unitarian Universalist Church. Join us for this special speaking event from recognized expert on white nationalism, Devin Burghart.

Devin Burghart is president of the Institute for Research & Education on Human Rights, and coordinates the Seattle office. He has researched, written, and organized on virtually all facets of contemporary white nationalism since 1992, and is internationally recognized for this effort. Devin began as a research analyst with the Coalition for Human Dignity in Seattle, and was co-author of Guns & Gavels: Common Law Courts, Militias & White Supremacy in 1996.

In Chicago, he worked as the director of the Building Democracy Initiative, where he reported on white power music and on the new nativism, including a groundbreaking background report of the Federation for Immigration Reform in 2001. He developed new organizing approaches to counter bigotry, including the Turn It Down Campaign to stop the spread of white power music, and the Campaign for a United America to challenge the new nativism.

This program is funded in part by the Jewish Federation of Kansas City.